Braking is a precision skill. World Champion Driver Jackie Stewart is reported to have said that braking is the last skill that a skilled race driver learns really well. But braking skills are often overlooked because they seem so simple and obvious. When you need to slow down, you push on the brake pedal. If you need to stop quicker, you just push harder.

This simple approach works fine when you’re cruisin’ on the boulevard, but it does not prepare you very well for the demands of high performance driving, where you frequently need to reduce speed very accurately in the shortest possible time and distance. In such a situation, braking too lightly will probably cause you to start braking quite early, using more time and distance than necessary. Conversely, braking too heavily may lock up your brakes, which results in a loss of steering control and increases your stopping distance. This can also ruin your tires with flat spots.

What you need is threshold braking.

WHAT EXACTLY IS THRESHOLD BRAKING AND WHY IS IT IMPORTANT?

Threshold braking is applying your car’s brakes to the point that they have their maximum power to slow the car without losing traction. That means pushing on the brake pedal almost hard enough to lock up the brakes. With just tiny bit more pressure on the brake pedal, the tires begin to lose traction and start to slide. Beyond that point the tires rapidly lose directional control and don’t stop the car as well.

Linda Chapman, former RMR Chief Instructor, suggested the topic of this article. She pointed out that braking is important both on the street and on the racetrack. On the street, when a line of traffic stops unexpectedly, it is critical to know the feel of the brake pedal in order to be able to exert maximum stopping power without locking up the wheels. We have all seen accidents in which a driver locks up his brakes in a panic stop situation and slides straight into the rear of the car ahead. A little less braking pressure could allow the car to retain directional control and steer away from trouble.

On the track, improving your braking is a great way to decrease your lap times. Braking is the first step to getting out of a corner as fast as possible. The object of braking at the end of a straightaway is to reduce your car’s speed to the optimal entry speed for the next corner. If you do this just right, you will use the maximum length of the straightaway for acceleration, then reduce your speed in the shortest possible distance (no coasting!), and enter the turn at the highest speed that will get you through the corner safely. The key is to know exactly when and how much to get on the brakes in order to apply maximum braking power without locking up the wheels.

Threshold braking requires a sensitive touch to maximize braking power without exceeding the threshold. The braking threshold depends on a variety of conditions. We all know that the threshold will be lower on a wet road than on a dry surface. Snow and ice dramatically lower the threshold (though many local drivers seem blissfully unaware of this – until they need to stop!)

Temperature of the tires and the road surface is important as well. Cold days at the racetrack are notorious for accidents when drivers don’t recognize the lowered braking threshold until they find themselves sliding off the track. Racing tires have poor adhesion until they reach proper operating temperature. Conversely, street tires can overheat in a track session and the driver will feel them become slippery or “greasy”.

The point of all this is that you need to be aware of these possibilities and observant to monitor the conditions that influence the braking threshold.

There are several good references that discuss braking technique in detail, so this article will not try to duplicate them. It may be useful, however, to identify some of the most common braking mistakes:

Using the brakes too lightly is the most common braking mistake that Porsche Club instructors see. This is usually a result of unfamiliarity with the car, the driver not knowing exactly where the brake threshold is. If you don’t know where the threshold is, it is prudent to begin braking very early. (It is clearly a sign of good judgement to err on the safe side.) Of course, this does not maximize performance on the track, nor does it prepare you for emergency maneuvers on the street.
Very often, early and light braking is combined with coasting into the turns. This is normal on the street, but on the track coasting doesn’t make sense if the goal is to maximize performance. You should be accelerating or decelerating, not coasting.

The opposite mistake is waiting too late and then braking too heavily. Sometimes this is caused by reading too many racing magazines, which communicate the simplistic and erroneous notion that the way to go fast is to wait until the very last second and then nail the brakes, producing lots of tire smoke and violent movement. Most often, overly late braking results in the car to missing the turn-in point and entering the turn off line and out of balance. That makes for a turn that is uncomfortable and also not very fast. In some cases the car ends up sliding with the wheels locked up, producing nice flat spots on the tires. If you do that, you’ll hear BUMP-BUMP-BUMP as the wheels go around. If carried to extremes, the late-late-late braking approach leads to spectacular and potentially dangerous results, such as spins and cars sliding right off the racetrack.

A third common error is braking while turning. At low speeds this is OK, but not in high performance driving situations. Tires have a limited amount of traction, and when the tire is turning the car it has less traction available for braking. We see this most often when a driver approaches a corner too “hot”, brakes and turns at the same time, and ends up with the car sliding straight ahead, regardless of how far the wheels are turned. Another common mistake is stabbing, punching, or pumping the brakes. Accurate threshold braking requires a smooth and sensitive touch to keep the braking force at its maximum effective point. A violent approach doesn’t work very well.

A note about anti-lock braking systems. ABS is standard equipment on all newer Porsches. The purpose of ABS is to manage the braking threshold for the driver. When it pulses, that’s ABS doing its work. It is important not to pump or modulate the pedal when this happens or you will defeat the purpose of ABS.

WHAT CAN YOU LEARN IN THE OFF-SEASON?

It is dangerous, of course, to practice real threshold braking in traffic. You run a real risk of being rear-ended by an inattentive following driver. This is a skill that needs to be practiced in a safe and controlled environment. Empty parking lots and autocrosses are good for this purpose. The key here is to develop your sensitivity to the behavior of your car as it approaches and exceeds the braking threshold. The more you practice, the more you’ll gain confidence in your ability to feel the threshold.

On the street, you can develop the smoothness of your touch on the brakes and the accuracy of your judgments by focusing on braking situations as you drive. Simply paying attention to the pressure of your foot on the pedal will help build your sense of braking.

There are also some exercises that can hone your braking skills on the street. (Be acutely aware of your surroundings to avoid situations that could present any danger to yourself, to pedestrians, or to other drivers.) A stop sign or light can give you an opportunity to hone your braking judgment by selecting a reference point – say, a painted line on the street – where you want the car to stop, then maintaining constant braking pressure until the car comes to a stop. See how close you came to your mark. With practice, you’ll notice a marked improvement in both your ability to stop right on the target. You’ll also find that this ability is easily transferred from one vehicle to another.

A similar exercise can be done to develop accurate judgment and smooth transitions in turns. A turn that you make frequently on your way to work can be your laboratory. (It should have good visibility, little traffic, and no hazards.) Set a target exit speed, say, 30 m.p.h. at a particular reference point. Now identify a point to begin braking, brake with constant force, execute a smooth transition to acceleration, and complete the turn. Do not look at your speedometer until you pass the reference point. How accurate were you? Try it every day for the next week and watch your skills improve.

Working on your braking skills requires almost no time commitment. All that’s needed is to give it some attention on a more-or-less regular basis as you drive around town. In return, you’ll improve your performance at the track and your safety on the street. 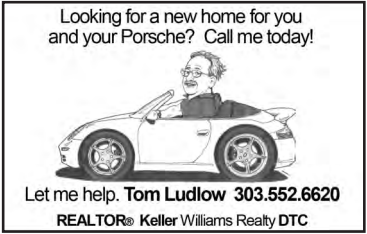 Copyright©2022 Rocky Mountain Region, Porsche Club of America All rights reserved.
All copyrights, trademarks, and photographs are property of their respective owners.
Contact Us